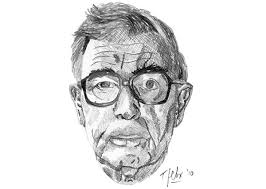 “The dread of getting old is a universal, if intermittent preoccupation. ‘As I give thought to the matter,’ said Cicero, ‘I find four causes for the apparent misery of old age: first, it withdraws us from active accomplishment; second, it renders the body less powerful; third, it deprives us of almost all forms of enjoyment; fourth, it stands not far from death.’”

2014 will not come around again – neither in number, nor in its sweeping assailment of great names. Football has mourned the imperious Alfredo Di Stefano (aged 88), the exquisite Tom Finney (91) and the explosive Eusebio (71). Politics/journalism has lost the ameliorative Bob Crow (52), the messianic Tony Benn (88) and the outspoken Joe McGinniss (71).

One could compare the year – if ballsy enough – with 2005 when literature lamented the departure of Arthur Miller (89), Hunter S. Thompson (67) and Saul Bellow (89) – men whose perception of that around them astounded and left in wonderment the reader and listener.

Squeezed into this life are naivety, easy optimism, flair, fear and the wisdom of knowing that we know nothing. Beyond the pallor and impoverishment of old age, however, are those ready to defy Cicero’s first cause; players and sportsmen for whom creaking knees and ravaged minds are modest hindrances.

Across eight table tennis clubs, the septuagenarians stretch – the two octogenarians in the league, Brian Hall and Colin Roberts respectively ruminating over the “continued challenge…obsession” and the perhaps unmatched feat of winning “seven Ron Hindle trophies”.

The bug that is table tennis surpasses the doom-like proclamations of hardy philosophers (“Wrinkles are harbingers of a slide to nothingness, not marks of a transcendence to come.”) It casts a wand over leaden feet and comfy chairs. The tales of the ‘oldies’, of the players that keep on running are but specks in a whirling universe, yet they must be heard:

Alan Bradshaw – “I did my 2-years national service from 1954 to 1956 [during which time] I won a lot of regimental table tennis contests. After winning thirteen competitions in the NAAFI canteen, I was advised not to enter any more.”

Neville Singh – “I used to play on a rolling and pitching ship in the Atlantic Ocean.”

Ian Wheeldon – “There was a room under the local church where we could practise at any time…collecting the key from the vicarage.”

Richard Reading – “First played table tennis at Bovington (Army) Camp in 1960. It led me to becoming an international athlete.”

The birth certificate of Dave Parker will be scrutinised next month. He will be the newest member of the clan, of the 70+ brigade and to Brian Hall a mere pup.