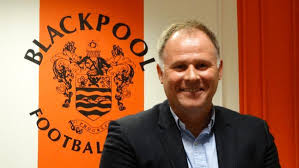 Blackpool FC’s fall from Premier League glamour in 2010/11 to League One obscurity five years later is to many the consequence of blinkeredness and a Kafkaesque environment where only the wrong are right. The 2nd June appointment of new manager, Neil McDonald serves not to highlight increased desperation at the club but rather a new-found reality with limited bait.

The Seasiders are no longer the swaggering immortals of yesteryear. Long gone are Stan Mortensen, Tony Green, Ray Charnley, Alan Suddick and the like. Today’s players are drunkards by comparison and so low in numbers as to leave ample room at the bar. Such is the recent regression that the 2006/07 stewardship of Simon Grayson and his fellow Yorkshireman (and goal scorer), Andy Morrell must seem like a halcyon glow – the mythical bird in flight from the third tier after nearly three suffering decades.

Ill-fated once more alas (having barely taken to the skies) and preparing itself to run through the lower league trenches, Blackpool FC – along with its famous tangerine strip – is now struggling to retain any sense of credibility. Complaints and unrest over numerous things dog the club: the Bloomfield Road playing surface; the threadbare squad; dwindling crowds; the Squire Gate facilities or “Training Ground & Centre of Excellance” (sic); the removal of the Mortensen statue; and controversial chairman, Karl Oyston.

‘Gloomfield Road’ is how this 1953 FA Cup winning club is referred to on popular forums, Back Henry Street, Fans Online and Vital Football. Something appears rotten and neglected – unprofessional and bewildering. And yet into this mire has willingly walked Neil McDonald, the 1980s Newcastle United full-back. He is not recognised by many these days – assistant managers generally aren’t. “Who the Hell is Neil McDonald?” was a Fans Network article which appeared in the hours after his appointment. Fans have grown used to recently retired, successful players promising to embody their high standards in a team or foreign names whose after-match interviews are forgiven because flair has been re-denoted as a language of one’s tailor, not one’s words.

McDonald has so far ‘failed’ on both counts. There are no bespoke suits – just northern cuts and a chimney-sweep barnet. Some of his quotes have been decidedly trite and banal – taken from the stock cupboard and worn out even more: “This is a great opportunity…a massive club in my opinion…I’ve got to try and get it back to where it was.” Underneath the curdled words rolled out for the cameras, however, is an engrossing backdrop. Neil McDonald was somebody – “An intelligent, classy full-back who knew how to take a chance” according to Geordie central; 24 goals in 180 appearances in fact but ultimately “handicapped by injuries”, his second club Everton “picking him up too cheaply”.

No stranger to the north-west after this (going on to Oldham, Bolton and Preston), McDonald was a former England U21 international earnestly carving out a career. Significantly – and hardly reported – he began his playing career alongside giants like Kevin Keegan, Terry McDermott, Chris Waddle and Peter Beardsley. After that Neville Southall, Trevor Steven, Graeme Sharp and all manner of iconic names crossed his path. You do not sit in such dressing rooms unless blessed with some strength. McDonald can give the impression of being a soft, cuddly bear – leant on by those around him. He is a down-to-earth, likeable fellow seemingly not schooled in boardroom smarts or shrewdness. Interpreting him this way is to miss the bigger picture though.

What of his time at Carlisle United (now an eon ago, nearly eight years)? “Many players spoke glowingly of his coaching methods and sessions, and his reputation as a coach has always been extremely high,” Jon Colman, journalist at Cumbria’s News & Star tells me. “It was alarming then for McDonald to be sacked after one game of the 2007/08 season and this is something that has largely been shrouded in mystery for most of the years since.” That was until nine months ago in September 2014 when former Carlisle owner Fred Story admitted: “I now regret sacking him.” 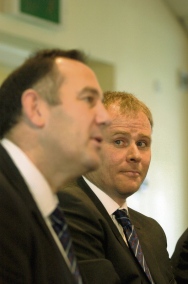 Fred Story (left) and Neil McDonald at Brunton Park in 2006

The BBC archives show that McDonald’s squad travelled to Walsall on Saturday, 11th August 2007, “dominated the first half” in front of a 6,933 crowd and came away with a respectable point. Twenty-four hours earlier McDonald had prised away Joe Garner from Blackburn Rovers for £140,000. Forty-eight hours later, the man with the most humble expression in sport was fired. Part of the club’s ‘generous’ statement read: “The termination of the contract is not a knee-jerk reaction, and is not part of any disciplinary action.”

So why the sacking? A manager can die on Monday, 13th and be partly resurrected on Saturday, 13th. Colman’s exclusive seven years later rinsed out the damp rag that is often boardroom words. Story quite simply broke his silence: “I sacked him because we had differences of opinion on handling the media and on player transfers, and I also thought he had lost the dressing room.” Lose the dressing room, he did not. And on the other matters Story readily confessed “I should have worked with him”. Implicit in Story’s new-found openness is that McDonald – in his first managerial role – was perhaps too raw, a little clumsy (or honest as they used to call it). Hearing him now, you wonder if the Geordie twang interspersed with north-west acquiescence has become too smooth, flat and regulated.

It is easy to see that McDonald is a good man, of the right constitution, but he is evidently holding something back. A nervousness and semi-fear shine through him. He is part actor, part coach. Fred Story has not entirely gone away – just re-clothed himself as Karl Oyston. And men such as these have a litter of former managers scattered around them, souls they have pulled the hand grenade pin on, people they have discarded because they choose not to study themselves (How could Nero ever be wrong?).

This is the worry: Blackpool FC – a club in a more ramshackle state than Leeds, Newcastle and Sheffield United put together; a one-year rolling contract for McDonald hardly an endorsement of his talents and unlikely to seduce the right players to the Las Vegas of the north. Kevin Boroduwicz, Blackpool Supporters Trust Secretary is uncompromising: “Neil McDonald is dependent to a great degree on the quality of the tools he is given to do the job. His predecessors, including Holloway, have not been given proper provision in terms of finances or facilities. The archaic training facilities that have barely changed in 70 years, the contracts issued to players that almost guarantee a huge turnover in staff and a lack of continuity, the lack of any clear footballing philosophy or policy that have ensured a decline in the club’s on-the-field fortunes. I could write at some length on this alone but wouldn’t want to bore you unduly.”

Neil McDonald will turn 50 years of age on 2nd November. The milestone will either represent a first quarterly conference call lauding his appointment or a panicked gathering of the board should Blackpool be slumped near the bottom of League One. Judging from the club’s Ashley-esque media commitments (Stewart Hudson informing me “The manager has already agreed to do an in-depth feature piece with a national newspaper this weekend” [my italics]), contempt for local scrutiny seems alive and well.

The new manager, one feels, deserves to succeed. If he can start regaling the watching public with some real, earthy stories and bits of history (the things he tells the players) – away from the staple lines – then all the better.

You just fear that this is a cardboard club with cardboard executives, however and unless they are able to address things on so many fronts, convincingly and transparently, then the doom-mongers will have their day.

Maybe the capture of Brad Potts from Carlisle – the old stomping ground – on 11th June (using actual money) can act as a catalyst. One can only dream or drown in the understandable cynicism.