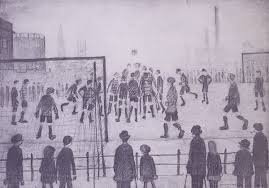 Not the delirious atmosphere I would have expected in the local public house four miles from Fleetwood, five from Blackpool. The Golden Eagle has changed hands recently – been entrusted to a black-T-shirted crew somehow representative of Fleetwood playing away.

And away Wembley indeed is. It is also a fleeting memory from 1985 (the FA Vase Final versus Halesowen) – some twenty nine years ago when Fleetwood were donning their shirts to an altogether different beat in the lowly North West Counties League Division One.

This was the same line up that pillaged York bar Alan Goodall returning for his stand-in, Steven Schumacher. You look at the individuals on paper and know they are capable. Of torment. Of sweeping passes. Of penetrative runs. Of telepathic thought when Conor McLaughlin, Antoni Sarcevic and 24-year-old David Ball are out on the tiles.

Chances rained down early in this match in the manner of a freak storm – attached themselves to Ball’s feet and head. The remnants of a woeful left-foot, dragged shot from Iain Hume rolled in front of Ball who had his back to goal but spun decisively to prompt a clawing save from Burton’s Dean Lyness. Half a minute later, he headed a Josh Morris cross on target only for it too to be bundled out by Lyness.

The omens were good, however. The Cod Army seemed full of ambition and aspiration. The ‘Brewers’ were always going to be a more pliant opposition compared to ‘The Shrimpers’ of Southend.

Burton’s Adam McKurk and Billy Kee clearly had pedigree but there was something in the Fleetwood water cooler on this fine Bank Holiday Monday that stimulated a renewed charge, a fresh impetus of ideas from the red-shirted messiahs.

No one embodies such momentum more than Ball. No one offers more hope for the future than the man who runs sideways, loving the shoulders of the enemy. The 29th minute – Ball again: a left-footed shot after a short pass from McLaughlin (wide). The 31st minute: a Ball header, wide right. The 33rd minute: a Ball shot blocked from the left edge of the box.

Then came the 75th minute. Step forward An-ton-i Sar-ce-vic; the 14,007 crowd not entirely perceptive to the copious threat or mighty pillars that are this man’s legs. A swing of the right boot. An accurately aimed missile. Looking like a cross for swarming heads to the right of the area. But, no – Lyness commits close to his 6-yard box, finds himself grappling with a rogue Fleetwood player. A late touch on the ball, but in, in!!! Bottom right.

Fleetwood hung on. The earth back home didn’t need the hydraulic fracturing of dark forces in order to move. 27,000 residents scattered between London and the north precipitated such a ripple.