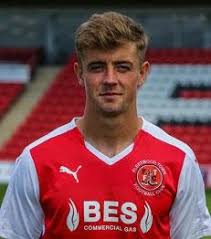 Fleetwood Town have yet to find their Decimus Burton in the dugout it would appear. There are few flashes of genius emanating from the management team and even fewer coherent after-match sentences which might gee up the Cod Army faithful.

Steven Pressley arrived on the Fylde coast four months ago now. He seemed composed and knowledgeable. There were strands of originality in his thinking. A lot of people warmed to him because he seemed to be from the NO BULLSHIT school of managers.

Recent programme notes and comments in the press have detonated this initial interpretation of the Elgin man, however, or at least shattered the wise, Scottish aura. Sample words from SP include:

4.2.2016 (Programme notes vs Barnsley): “In the last couple of months I don’t think there’s been a game where we haven’t been the better side.”

7.2.2016 (Programme notes vs Shrewsbury Town): “At this moment in time the feeling in the dressing room is that from 18 yard line to 18 yard line, we are the strongest team in this division.”

It would probably be sensible to admit that Wigan and Gillingham have better midfields and that the former were a much slicker side when they visited Highbury on 28th December. As for being the “strongest team” between boxes, the analogies are endless and each one of them points to desperation and risible effrontery.

We make mistakes in our own area and can’t seem to penetrate the opposition’s, a simple man might conclude. Why mask such a fact in nonsensical blubber?

Pressley had an opportunity on Sunday to redeem himself in part. The obvious failings against Barnsley in the Johnstone’s Paint Trophy Northern final (2nd leg) – starting with the wrong strikers (Bobby Grant, Jamille Matt & David Henen) – were there to be addressed. In came fans’ favourites, David Ball, Ashley Hunter and new boy Devante Cole against Shrewsbury – guile, hunger and pace. But cue the manager’s splash of Tabasco sauce.

Pressley has been resolute in sticking with his 4-3-3 system, but within that formation lurks imperilment. Ball, instead of being given his Cantona-esque forward role, was asked to play in midfield. As was right-back Conor McLaughlin alongside the leggy and more natural Victor Nirennold. Such a makeshift jamboree stumps the purist. Times are admittedly hard without the injured trio, Jimmy Ryan, Eggert Jónsson and Antoni Sarcevic but better compromises could have been made.

Managers are apt to maintain a mystique at times so that it sets them apart from the crowd, from the dumb-bell wielding public. Square pegs in square holes are too obvious, too straightforward. They risk the fans actually being able to predict the day’s line-up and the manager not earning his corn. Why have a full-back slumming it in defence when you can convert him into Gary McAllister overnight? Why have a striker ‘posing’ up front when his skills could be adapted for the twisting and turning required in midfield?

Such boldness would be applauded if it looked right and did not leave other areas charred and bereft and supply lines creaking. Hunter, I hear, likes his eggs poached with brown sauce on. Cole, so the rumours go, is partial to a good bacon butty. Room service alas at Hotel Fleetwood is, these days, full of clattering and burnt toast. Wont to eat in some form during the 90 minutes, Hunter and Cole have taken to venturing down to the kitchen or midfield in their dressing gowns for supplies.

In short, what was a respectable midfield of Ryan, Sarcevic and Jónsson – still without the perfect gleam – has become a slightly ragged outfit. Ball is undoubtedly a striker – the superlative link in the chain up front. McLaughlin is an international full back, but definitely not a midfielder able to spray it about. Nirennold (One small step for Victor, one giant leap for the rest of mankind) is a capable French battler, able to cover yards and yards of land in the manner of a John Deere tractor. On his own though, Nirennold cannot shore up the vulnerable Fleetwood wall.

A glance at the bench on Sunday and at the players warming up revealed two interesting numbers: 20 and 28. The former belongs to 19-year-old Keano Deacon – a wiry, still raw midfield prospect from the youth set up; the latter to Prestonian, Jack Sowerby, soon-to-be 21.

It is Sowerby that intrigues. He has started a mere three times for Fleetwood this season but possesses qualities that are much in need. Considered a striker but with the constitution and make-up of a midfielder, he is the one man in recent months who has shown glimpses of all-round ability. Passing it long, getting stuck in, threading the ball through defences, awareness of those around him, an eye for goal – add to this leadership (which will come with age) and you have a very decent find.

Is it too early for Sowerby? No. Can he bring something to the midfield party that we have been lacking? Yes. You cannot put too much weight on his young shoulders, but why shouldn’t he be out on the town with Ryan, Jónsson and Sarcevic?

Ryan, according to Chesterfield FC’s Head of Recruitment/Development, Paul Mitchell is “an all-round midfielder [who] can play both [attacking and defensive] roles really well”. When pressed though as to Ryan’s main role before joining the Cod Army, he conceded “Yes”, it was as an attacking midfielder. Fleetwood fans, fully aware of Ryan’s gifts and the energy he brings to the team, have mostly seen him as a sideways marauder. He can shoot powerfully and skip past players with ease, yet these occasions are rarer than they should be.

This leads to the question of why the man from Maghull seems inhibited at times and whether Sowerby can form the perfect tag team with Ryan thus finally engaging with the players up top. Have injuries curtailed Jimmy’s forward runs this season? Has he been shackled by Pressley’s demanding 4-3-3? Has Sarcevic been given the only pass to the nightclub named Adventure?

The boo-boys have come out in force in recent weeks. On Sunday their disillusionment ranged from the Kop/Memorial Stand’s “You don’t know what you’re doing” upon Hunter being substituted for Grant (87’) to the Highbury Stand’s consistent jeers at having to witness back passes. The former happened because Hunter runs and runs. His work ethic is phenomenal. It did not diminish in any way the esteem in which fans hold top scorer, Bobby Grant. The latter was down to grumblers and green individuals in the crowd who do not help the team one bit.

Patience and an appreciation of crucial areas of the team being in the physio room seem to be traits that 21st century individuals are no longer blessed with. Grievances with the manager and grievances with the team are two very different things though, it should be pointed out. A manager sits on his throne and is there to be challenged or overthrown. Players are in the immediate firing line and require the crowd to pass them bayonets.

“The fans have to be patient. We will stay up. Times are different at Highbury at the moment. They need to bear with it and be the 12th man, not boo!” is the language coming out of the dressing room. Articles like this (Lack of Room Service) are meant to assist the management and ultimately the club and the players. Boo boys – during a game – do the opposite. They destabilise the troops. They cynically get into the heads of the players thus affecting the team’s performance.

Highbury is a small ground. Players at times must feel owned by the fans, obliged in part to do as their turnstile ‘bosses’ say. Many a time left-back Amari’i Bell has been encouraged to bomb down the left for example. This, on occasions, can help – even if it breaks with express instructions from the management – but what is unhelpful is negativity and misguided barracking from sections of the crowd.

We know the problems at Fleetwood Town. And Steven Pressley is currently part of them. Crowbarring players into a single, inflexible system and not adjusting his tactics radically enough during a game scores him an ‘Average’ on the report card. Thirty minutes into the game on Sunday it was clear that Ball needed switching with Chelsea loanee, Alex Kiwomya in order to drive the front line. It was also obvious that Sowerby deserved his chance alongside Nirennold and (ultimately) Kiwomya in the middle of the park.

You can generally spot a midfielder’s swagger from 100 yards. McLaughlin, no matter what his qualities elsewhere on the pitch, is not from this school. The complete decimation of one’s midfield is not an envious positon to be in, but Pressley – having gambled on utilising players out of position – should then have acted when he knew we were not forceful in the slightest.

Football is about constructing belief. You choose your traffic light colour under the guidance of the manager: Red for Fear; Amber for Realism; Green for Belief. The latter weeks of Graham Alexander’s reign teetered between amber and red. Realism is often a good thing, but too much of it – and not enough dreaming – and you fall into fear. Belief, on the other hand, comes about through embedding strong faith in players, allowing them to express themselves. Too much tightening, too much constriction of flair and you have gifted players in rags; footballers over-thinking and unrecognisable.

Pressley’s brief tenure is not at the same disquieting level Alexander’s was in September 2015, but ideas and certainty need to be churned out fast if Fleetwood are to avoid the ignominious prospect of relegation back to the fourth tier. Chairman Andy Pilley – three years older than his current manager – clearly has trust in the former Rangers and Hearts’ centre half, but the goals have worryingly dried up since November. Room service for the strikers is nowhere to be seen and scintillating bellboy, Josh Morris has changed hotels.

A canny chairman would drive up to Bradford and get our principal supply line back whatever the cost. The underused Morris (another Prestonian) seemingly and understandably prefers the red rose of Lancashire as opposed to the white of Yorkshire.

Cod Army fans listen out for the conspicuous cry of “Come on boys! Come on Fleetwood!” at home games which stems from a grey-haired chap in the Highbury Stand. It used to find its voice every seven minutes but of late has become a little arbitrary. Even the words have been edited (“Come on lads!” followed by an empty void) – almost, one senses, in response to the plight before our eyes.

Is Pressley the miracle man Pilley had hoped for? Is he slowly building something few can currently see? He needs a born leader from somewhere or a majestic spark. Without either there may be another coup in the managerial hot seat.