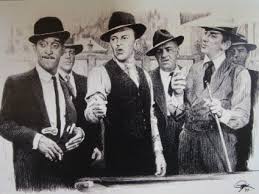 Given the BBC iPlayer’s recent showing of The Rack Pack – a fond salute to snooker in the Seventies and Eighties (following the advent of colour TV) – it seemed fitting that table tennis should have its own crew; a collection of individuals from the local scene who, largely through their talent, are distinctly recognisable, controversial or quite simply big characters.

The top ten ‘Chosen Ones’ (courtesy of a secret and non-democratic vote) are:

10: Neville Singh (Irlam Steel) – No list would be complete without Singh. Little is known of him in the higher echelons, but ‘The Ultimate Banana Skin’ – as he was once known due to a mere single victory in both 2011/12 and 2013/14 – continues to tread the table tennis halls with an admirable and implausible keenness.

9: Derek Watmough (Coburg) – Most sportsmen cross the ‘white line’ and routinely increase their rage. Watmough does the opposite. His polite manner when on court is summoned from a mysterious source.

8: Andrew Michnowiec (Hilton) – The rules of the game state that a player, when serving, should “project the ball near vertically upwards, without imparting spin, so that it rises at least 16cm (6.3 inches) after leaving the palm of the free hand”. The Joola-clad Michnowiec is very much old school. His serves have bamboozled even the great John Hilton, but their legality is a hot topic in Premier dens.

5: Jeff Craighill (Wharton) – Craighill’s 2013 Closed Championship Veterans title remains etched in the brain. ‘The Digger’ pushed his body to the limits that evening in what was a remarkable comeback from 2-0 down.

4: John Henry Scowcroft (Heaton) – The soon-to-be octogenarian should patent whatever diet he has been on over the last sixty years. Old folks’ home proprietors quake when he passes.

3: Paul Brandwood (Hilton) – Claims to have shown the mechanics of the game to Amir Khan.

2: Wilson Parker (Hilton) – Although he has stepped away from the game in recent months, Parker continues to exert a unique shadow over the sport. Famed for ‘beating himself up’ over small errors, his presence is a big miss.

1: Josh Sandford (Harper Brass / Hilton) – Not seen since acquiring a girlfriend; his dissing the opposition very much an act of affection.